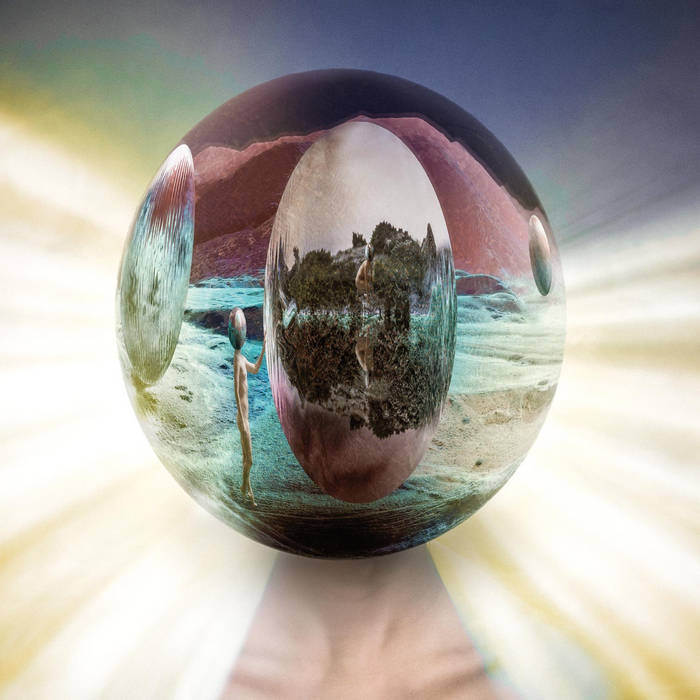 In Plato’s vision of the universe, the Hyperuranion is a realm of ideal forms where the soul waits before entering the body, inspiring humanity’s search for truth and beauty on Earth. On their seventh release and third for London-based RareNoise Records, the exploratory trio Chat Noir conjures their own Hyperuranion, a transcendent space beyond genre where electronica, rock, jazz, and ambient music meld into a rapturous hybrid.

For this latest manifestation of their ever-evolving sound, Chat Noir’s co-founders, keyboardist Michele Cavallari and bassist Luca Fogagnolo, are joined full-time by guitarist Daniel Calvi, who contributed his distinctive voice as a guest on the group’s previous release, Nine Thoughts For One Word. The trio is also graced on four tracks by the ethereal trumpet of Norwegian jazz great Nils Petter Molvaer, further enriching the tapestry of electric and acoustic sounds that mesh so vibrantly throughout Hyperuranion.

Plato’s vision provided a key concept as the new album took shape, according to Cavallari. “Our Hyperuranion represents the journey of a space traveler who returns to that place to reach the essence of things,” he explains. “Practically, this can relate to our constant reach for focus on the important things in life. Regarding our music more specifically, the concept of Hyperuranion relates to the coexistence of ethereal atmospheres with firmer musical ideas that are rooted in the different languages that inspire our music, from the experimental jazz and rock of the ‘70s all the way to the techno scene.”

That singular fusion has developed organically over the course of Chat Noir’s seven albums. The band started life as a traditional piano trio, albeit one that drew formative influences from EDM and pop music – akin to peers like E.S.T. and The Bad Plus. But the balance has shifted over time as the band has morphed into an electronica unit that still bears traces of its jazz roots deep in its DNA, however intriguingly mutated those genes have become. The only comparisons to their current incarnation are inventive EDM experimentalists for whom progressive jazz is one element in a heady mix: artists like Flying Lotus, Tortoise, NERVE, and Jaga Jazzist, among other wide-ranging names.

“In a piano trio setup, the balance between the three instruments is fundamental to fully exploit the possibilities of the ensemble,” says Fogagnolo. “We’ve always maintained a collective approach in our music, whatever form it has taken. That’s probably the most important lesson we learned from our past as a piano trio. Individual ideas and opinions are shared in an open discussion that looks always forward to exploring new possibilities.”

Another kind of “space beyond space,” one that the ancient Greek philosophers could never have imagined, has been crucial to the last several Chat Noir releases – namely, the cloud. Starting with their 2014 RareNoise debut Elec3Cities, the trio began to assemble their albums in a “virtual studio,” sharing files over a cloud-based system and constructing the final product incrementally. The process itself, like their music, has undergone a further evolution on Hyperuranion, one that looks as insightfully backwards as it pushes technologically forward.

The cloud-based system remained for the album’s pre-production, but this time out the actual recording returned to the studio environment, where the musicians recorded together in one room. This way, the virtual file-sharing allowed the music to be tweaked and manipulated as it was composed, with that material forming the basis for old-fashioned flesh-and-blood collaboration during the recording session. “We used the material that we’d worked on at a distance as a guideline,” Fogagnolo explains. “Then based on that, we reshaped the album in studio. As a result, Hyperuranion sounds more alive with respect to our previous two albums.”

The album jolts immediately to life with the urgent tension of “Blisters,” which erupts with tongue-in-cheek anger via Ringo Starr’s famous outburst from the recording of “Helter Skelter.” The insistent synth groove vaguely recalls Goblin’s scores for Dario Argento’s classic 70s giallo films. Given the cinematic qualities inherent to Chat Noir’s music, it’s no wonder they’ve been called on to score films by directors like Cristina and Francesca Comencini, including Cristina’s Oscar-nominated Don’t Tell.

The serene but determined “Humanity” follows, suggesting the grit and grace of descending to the corporeal realm, with Molvaer’s trumpet floating through like a shimmering oasis. The deceptively blissful surface of “Immediate Ecstasy” rests on the turbulent foundation of its roiling rhythms, while “Overcome” recalls Battles in its quirky acute-angled synth-pop, interrupted by a hushed interval featuring Calvi that luxuriates in the resonant scrape of fingers on strings, before surging forth with a mesmerizing finale.

Calvi’s contributions were essential to shaping the final form of Hyperuranion, according to his bandmates. “He’s become as much a friend as he is a band member,” says Cavallari. “Musically, he made essential contributions to Hyperuranion. Many of the tunes were developed from his musical ideas, and he also embellished our ideas with unanticipated solutions that pushed the tunes to new territories. Not to mention his signature bagna càuda, the anchovy and garlic dip dish from his homeland of Piedmont!”

Nils Petter Molvaer’s immediately recognizable tone opens “Quasar,” which sounds as if it follows his trumpet lines as they ping-pong into the cosmos. Cavallari and Fogagnolo discovered Molvaer through his 1998 ECM album Khmer, which showcased his similar sensibility in the use of sampled and computer-generated sounds in conjunction with acoustic instruments.

“Through Nils we discovered the northern European jazz movement, which has had a big
influence on our music,” Cavallari recalls. “Nils plays on four tunes on the album, which we basically crafted for him. It was very exciting to be in the studio with him. We knew it was going to be great and had high expectations, but his performance was beyond expectations. He added so much to those tunes. At the same time, he was very respectful of our ideas. He didn’t try to make our album sound the way a NPM album would sound. Rather, he was determined to follow our vision and add his unmistakable touch to it.”

“Glimpse” lies somewhere between a sci-fi movie soundscape and a futuristic pop tune, with a strong sense of narrative and evocative effects, with Molvaer contributing a rallying fanfare. “Ten Elephants” grows only gradually to the monumental scale suggested by the title; it begins with an ambient intro as weightless as floating in space, before a skittering beat intrudes, finally bursting into an ecstatic groove that threatens to spill over with buoyant release. “Matador” thrives in the seductive shadows, full of unidentifiable sounds, the woody slither of Fogagnolo’s bass, haunting tones and cascading guitar figures.

The limitless palette that Chat Noir draws upon reflects the trio’s unquenchable desire to fold more and newer sounds, voices and textures into their sonic vocabulary. The process is ongoing, so it’s only when looking back at a finished album that they can begin to assess how far they’ve come.

“We’ve always perceived the evolution of our sound as a natural, almost
unconscious process,” Fogagnolo concludes. The combination of electronic and acoustic instruments, he says, “is like having an orchestra at your fingertips. We first explored electronics mainly as an opportunity to expand our acoustic palette, enabling us to manipulate the sound of acoustic instruments beyond their natural resonance. This is something that has always fascinated us, and as a consequence it’s been something we used – and abused – in our productions! But recently, we started using more and more electronic instruments, such as analog synths and drum machines, as a main source of sounds in our tunes.”

On Hyperuranion, those instincts have merged to the point where it’s impossible at times to distinguish the source of any given sound. The organic and synthetic have reached a perfect stasis – a kind of ideal imagined way back in ancient Greece, albeit never in quite this form. For Chat Noir, it’s simply the means for achieving a stunningly expressive and utterly compelling artistry all their own.

From its origins as an acoustic jazz trio in 2001, Chat Noir has progressively broadened its vocabulary with the inclusion of electronic textures and sounds.
Throughout the evolution of its style, the band has at its core remained devoted to a true collective mindset. ... more

Bandcamp Daily  your guide to the world of Bandcamp

Featuring appearances from Kari Faux, Bluestaeb and and interview with NY-bred artist Wiki